Welcome! (Clicking this does not commence any convoluted technological process(you may now carry on))

These soldiers may seem like nothing of great gravity. They may appear as just some old soldiers from an age long gone. Artifacts of the last millennium. Information limited to antediluvian, dull textbooks.  You may think that these men are mere arcane bits and pieces of history waiting to crumble away into the foreboding abyss. But these were the people who set out to change history of not only the future of the United States, but possibly, the entire world. 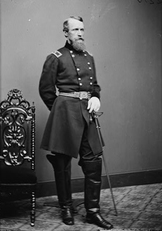 David B. Birney: Lieutenant Colonel: May 29, 1825 – October 18, 1864
Lt. Colonel Birney was the co-creator and leader of the regiment, until his sickness and consequential death. He began his military career upon co-creating the 23rd PA Volunteer Infantry immediately following the attack on Ft. Sumter. He rapidly received promotions, mainly due to his political influence rather than his military valor. This rapid rise in rank caused him to be disliked by his men or his officer colleagues. At the Battle of Gettysburg, his division and the entire corps was nearly decimated, and he was quoted saying “I wish I were already dead”. Soon enough, his wishes were granted when he caught malaria at Siege of Petersburg and died.
﻿ 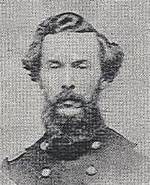 Charles P. Dare: Colonel: 1824- Oct. 25, 1863
Colonel Dare was the first to organize recruitment for this infantry. Before joining the military, he was a successful businessman, and as soon as Lincoln called for 75,000 volunteer militia, he got on the move to start supporting this campaign. He started a Schuylkill Arsenal which was at the corner of the Sixteenth Street and Filbert Street. He started this on April 18th, 1861 and in 3 days, the regiment reached maximum capacity. He was the Colonel of the 3 month service infantry but at the start of the 3 years, he fell ill and was forced to resign from his duty. He passed away from the illness not too long later.

John Ely: Major General: January 26, 1816- May 4, 1869
Major General Ely first served in the 23rd PA, then as Colonel of the 21st Veterans Reserve corps, and then became Assistant Provost Marshal for Trenton, New Jersey. For his “gallant services in the field” he was promoted to the rank of the Brigadier General, US Volunteers, and also Major General.

George C. Spear: Colonel: 1822-May 3, 1863
Colonel Spear volunteered to join the 23rd on April 1861 for 3 months service. After he fulfilled the first term, he signed up once more for 3 years service. He rose to the rank of Colonel and commander. He was then shot and killed at the Battle of Chancellorsville while valiantly leading his men in storming enemy lines.

John B. Fassett: Captain: February 25, 1829-January 22, 1831
Captain Fassett was the only man in the entire regiment who was awarded the Medal of Honor. He was awarded for his action of “while acting as an aide, voluntarily led a regiment to the relief of a battery and recaptured its guns from the enemy". A battery is a unit of soldiers similar to a company in an infantry regiment. It consists, 155 men, a captain, 30 other officers, 2 buglers, 52 drivers, 6 cannons, and 70 cannoneers.
Powered by